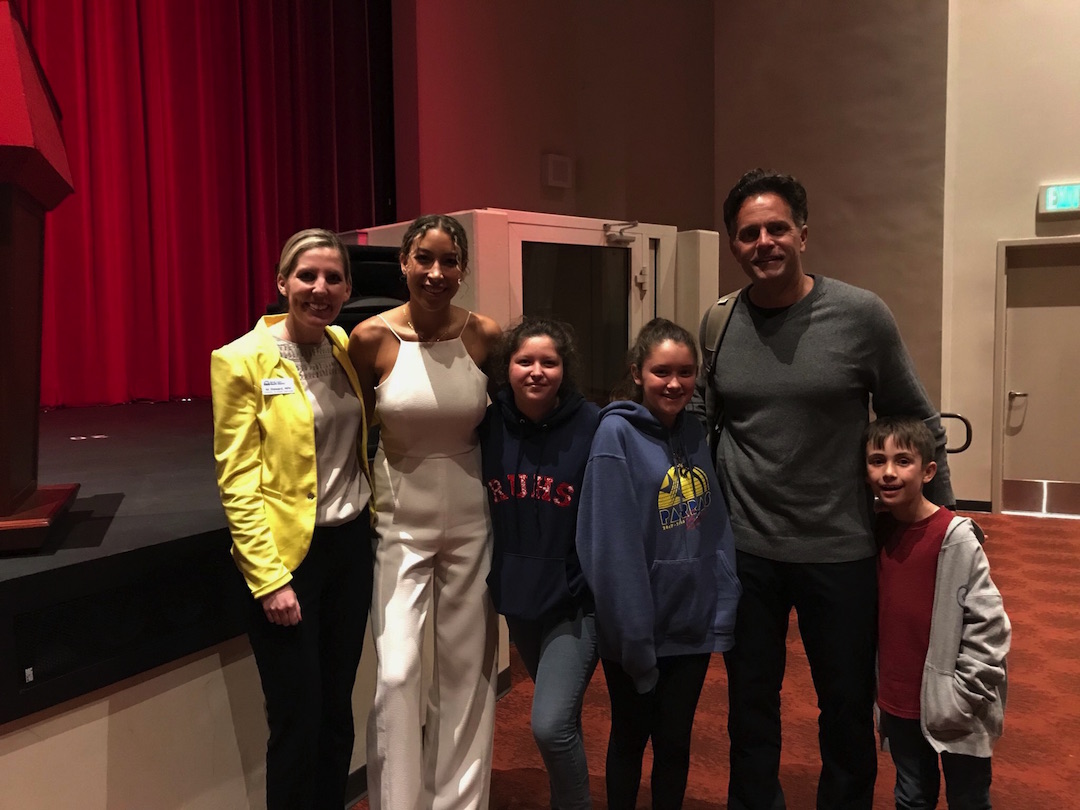 From the outside, it looked like Mikah Maly-Karros had it all.

Mikah Maly-Karros speaking to Manhattan Beach parents and teens at the MBX Symposium at Mira Costa High School in May 2016. Photo by Gil Castro.

But like many high-achieving teens in the beach cities, beneath the surface, Maly-Karros was struggling under the pressure and turned to alcohol to cope.

Her parents saw the signs and stepped in, but when she was on her own in college at UC Irvine, things snowballed. During her junior year, she lost her spot on the basketball team.

“It ended up being a great thing because that’s when I developed my passion for psychology,” said Maly-Karros, who now has a master’s degree in clinical psychology from Pepperdine University.

Today, she is nearly finished earning her license to be a marriage and family therapist, seeing young patients at high-end treatment centers in Malibu who also seemed to have it all.

On Thursday, Maly-Karros and her father, the former star first baseman, will visit Redondo Union High School to talk about teen wellness and parenting, offering relatable advice from both perspectives.

The free 6:30 p.m. workshop, titled “Purpose vs. Performance: Shifting the Mindset from Outcomes to Experience,” is part of a series put on by nonprofit South Bay Families Connected, the Beach Cities Health District and the Redondo Beach, Hermosa Beach and Manhattan Beach school districts.

A teen panel led by mental health professionals is scheduled for March 20 at Hermosa Valley School and, on April 17, Denise Pope, co-founder of the nonprofit Challenge Success, will lead a workshop at the Redondo Beach Performing Arts Center on finding balance.

According to the California Healthy Kids Survey, high school students in the beach cities have higher-than-average rates of drinking, drug use and missing school because of depression and anxiety.

“The rates of stress and substance use among our youth are concerning,” Beach Cities Health District CEO Tom Bakaly said in a statement. “The goal of the Families Connected Speaker Series is to connect parents with experts, and with each other. These concerns aren’t limited to one school district, which is why we’re partnering with South Bay Families Connected to bring Hermosa Beach, Manhattan Beach and Redondo Beach parents together to have these important conversations.”

For Maly-Karros, even as she achieved success on the basketball court, her emotional and mental health fell through the cracks.

“I think I have a pretty unique perspective because not only do I have a background in psychology and a master’s, but I also work with teenagers and I grew up there (in the beach cities) myself,” she said. “I definitely remember that experience, so I feel like I kind of can cover it from three different angles.”

‘Get to know your kid’

This will be the second time the father and daughter will give a talk together. They first joined forces in May 2016 for the MBX Symposium at Mira Costa.

Karros doesn’t want to give away too much of the presentation, but he said it won’t be about statistics, but real-life experiences. The main message, he said, will be “get to know your kid.”

“Everybody has stuff they’re dealing with and I think the more open we are, the more we’ll learn and the more we’ll be able to help one another,” Karros said. “But to put on this facade of, I live in this great place, my kids are great, everybody’s going to Stanford and they’re going to solve the world’s problems — that’s just not real.”

He and his daughter are still learning about each other as they work together on the presentation.

“He comes from a world where he was a professional athlete, there’s no time for crying, you power through,” Maly-Karros said. “To see him now being so open about talking about mental health is very admirable.”

For more information on the speaker series, visit southbayfamiliesconnected.org/events.

To view the full article on Daily Breeze, click here.

Health
In the News
Kids + Families