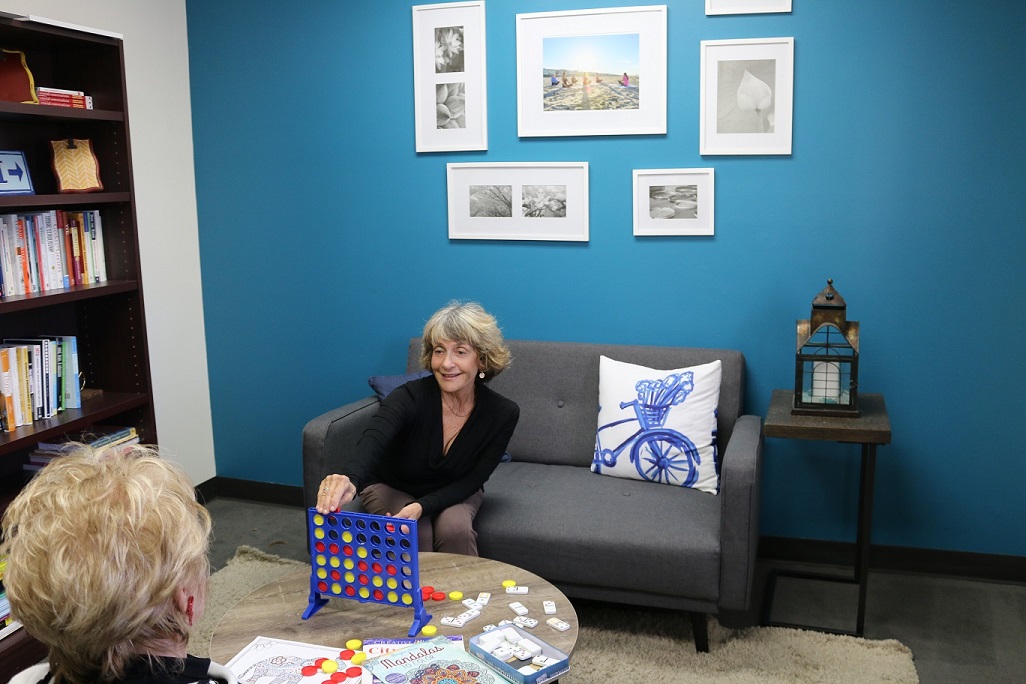 As dementia numbers continue to spike locally and nationally, volunteers like Redondo Beach resident Avra Diamond bring companionship and joy to those struggling with the degenerative condition through BCHD’s ‘Brain Buddies’ program.

Every Thursday afternoon, 73-year-old Avra Diamond (pictured above) visits her 90-year-old neighbor, Ana Marie. They started out in the summer playing games and coloring, but they have now eased into comfortable talks about the older woman’s lifetime of experiences. Sometimes during the hour-long visits Ana Marie, who grew up speaking Spanish, helps Avra hone her skills with the language. Though both women live in Redondo Beach, they didn’t meet until they were matched through a Beach Cities Health District (BCHD) program called Brain Buddies. The program got underway in 2017 after being shaped through a pilot test in 2015. Avra is a BCHD volunteer; her “buddy” and neighbor, Ana Marie, has dementia.

Research shows that activity-based interactions engage the minds of people with dementia.

“Every activity stimulates the brain and helps slow down the advance of dementia,” says Kerianne Lawson, LCSW, MSG, Chief Programs Officer for BCHD, “so we want to provide meaningful, joyful activity for as long as possible.”

As dementia progresses, people often lose initiative and begin to give up on activities where they once had vibrant interests. Brain Buddies seeks to reverse that by keeping those interests alive as long as possible. For example, one BCHD client was a painter, but had let it slip out of her life. So now her Brain Buddy paints with her. Another Brain Buddy engages with a former hairdresser by reviewing pictures of hairstyles from decades ago and current times.

Today, a half-dozen Brain Buddy volunteers like Avra serve BCHD clients afflicted with dementia. Lawson says that of the 430 older adult clients BCHD social workers serve in the Beach Cities, roughly 22 percent are struggling with dementia. The condition is growing as the population ages, with one in three people age 85 and older affected nationally, and threatening to overwhelm the health care system in the coming decades. The problem will be expanded in the Beach Cities too, as the majority of residents are expected to be age 55 and over by 2022. That means the need for specially-trained Brain Buddy volunteers will continue to rise.

“Not everyone with dementia is a candidate for the Brain Buddies program,” says Lawson. “Even those who are eligible can present challenges for our volunteers.”

People with dementia have trouble recalling recent events, recognizing people and places, and finding the right words. Their judgment can be iffy, their moods hard to control and daily tasks too much to handle.

The basics – communicating with people with memory loss, boundaries, activities, preparing to say goodbye, and much more – are covered in an eight-hour training session. Volunteers and clients are paired based on knowledge of their histories with the aim of ensuring that the experience is mutually beneficial. Support from BCHD Care Managers is available when needed.

Avra had no previous experience with dementia and admits that she wasn’t sure what she was getting into. Early on, she questioned whether she was doing a good job. For example, did a lull in conversation signal a lack of enjoyment for Ana Marie, and is it all right to just talk? The reassurance she received from BCHD social workers, other Brain Buddy volunteers and her client’s granddaughter gave her confidence.

“I feel so strongly about the training, the conference meetings and the continuing care that I receive. I’ve never felt as if I were hanging out there by myself,” says Avra, who has had isolating experiences in volunteering previously with other organizations. “The support is very, very strong.” The training was crucial, Avra says, adding that key attributes for a Brain Buddy volunteer are compassion, patience and adaptability. “It feels good that I can go every week and talk (to Ana Marie),” she says. “She calls me her friend, but I don’t think she remembers my name. I’m glad I’m doing it. I bring an hour of sunshine into this lady’s life.”

To become a Brain Buddies volunteer, apply online at bchd.org/volunteerapplication