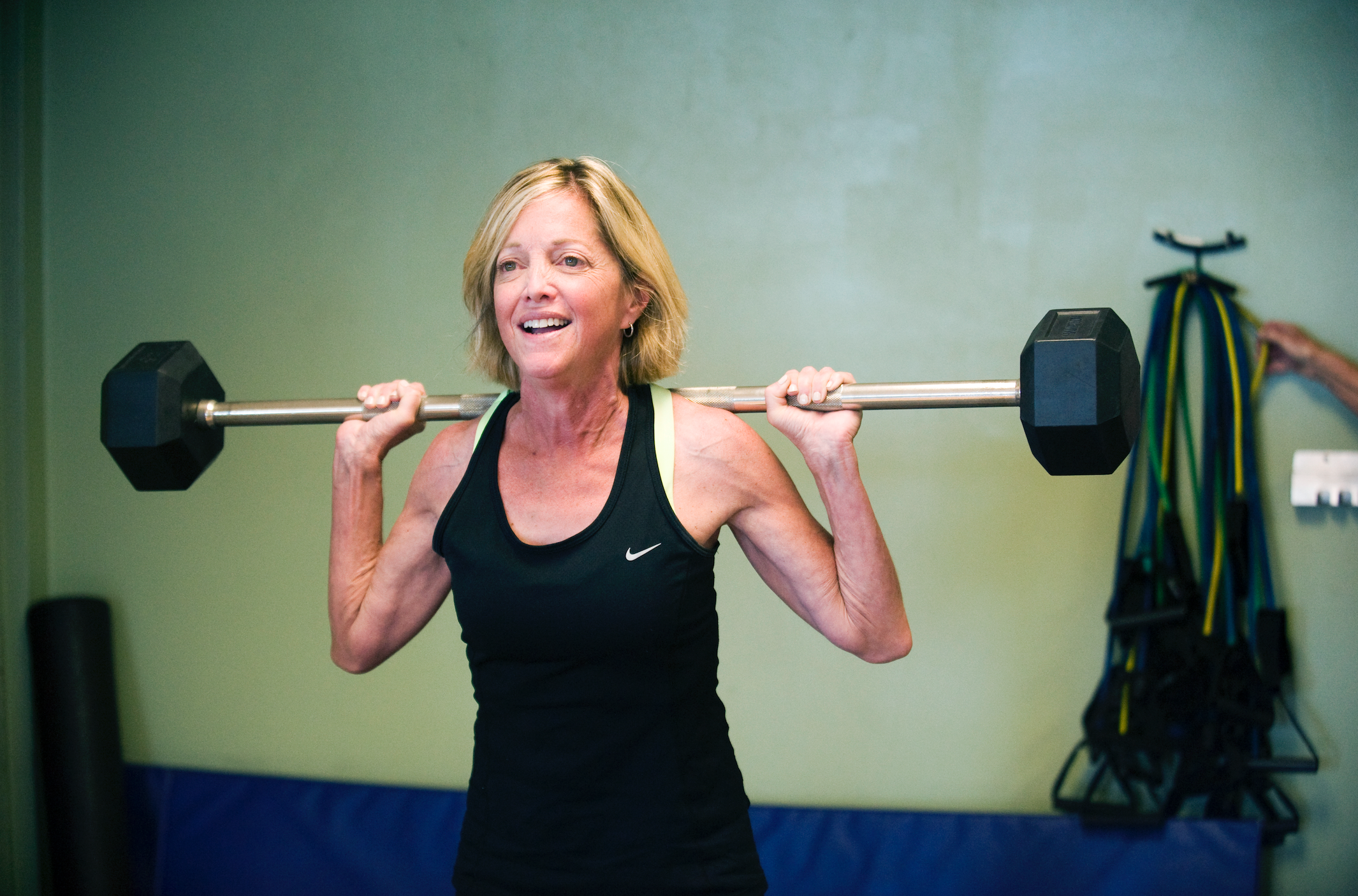 It’s that fleeting time of year when Americans resolve to spend more time at the gym and eat better. For most people, these are merely pipedreams – spurred by beach body aspirations and weight loss – that often fall to the wayside.

Six years ago, Corey, a 55-year-old, 100-pound spitfire with boundless energy and a contagious smile, made a commitment to get herself in better shape – not to drop weight or dress sizes, but to provide better care to her 15-year-old son, Joe.

Joe, who has special needs, relies on his mother to assist him with daily tasks, but reached a point in recent years where his growing stature was making it difficult for Corey to provide physical support and aid.

“I knew I needed to be strong for my family,” says Corey. “My son has extra needs and he had become stronger than me, so I needed to be just as strong.”

“I felt it was non-threatening and I could be myself and get in shape at my own pace,” says Corey about CHF. “It’s a very welcoming place to be, and learning to work out there doesn’t feel strange or uncomfortable.”

Initially, Corey did individual exercises, took classes and used the free weights, but soon enlisted the help of a trainer to shore up her core and back for the frequent occasions when she needs to lift Joe in and out of a car or provide balance assistance.

“She was already really high functioning when she started with me, but she really started taking herself to the next level recently,” says trainer Jason Bautista, who started working with Corey three and a half years ago. “Her success is really a testimonial to the work she puts into her conditioning and her personal drive to make herself stronger.”

Jason teaches Corey exercises and techniques designed specifically to allow her to move her son without injuring herself, especially her back.

“He’s (Joe) had several surgeries and I’ve had to be really physical with taking care of him,” Corey says, adding that she must help Joe get in and out of the car multiple times a day so he can attend adaptive activities like karate, baseball, track, soccer and Pop Warner Football. “He relies on me physically every day.”

Newman especially needed to up her functional strength to physically support her 130-pound son while he puts on his clothing and shoes each day.

“He holds onto my shoulders while he’s getting dressed and I’m holding him up the whole time,” says Corey. “I have to help him keep his balance a lot.”

Her husband Jeff says that Joe often needs special guidance that requires Corey to be strong and deliberate with her movements.

“With Joe, there’s times when strength really comes into play,” says Jeff. “He’s a big kid and doesn’t know his own strength, and if she didn’t hold her own he could really bowl her over.”

At the gym, Corey usually skips over cardio exercises because she’s “always running around all the time anyway,” and jumps right into the weight and balance training.

“I love anything with full body moves and anything fun like jumping, and I do a lot more with weights and balance so I can learn to move better,” she says.

Jeff says that visiting CHF is an important part of his wife’s week.

“She looks forward to going to the gym and it gives her a kind of release,” says Jeff. “It helps her mentally, too.”

For Corey, she’s simply thankful for the opportunity to visit a welcoming place to work out and improve her health and quality of life, and, most importantly, Joe’s.

“I’m thankful for everybody who helps us,” says Corey. “Jason’s always been there and knows what’s going on and how to help me a better parent, wife and person.”

“The teaching goes both ways,” Jason said. “I’ve learned so much from her.”

Suffice to say we can all learn from Corey, especially this time of year.